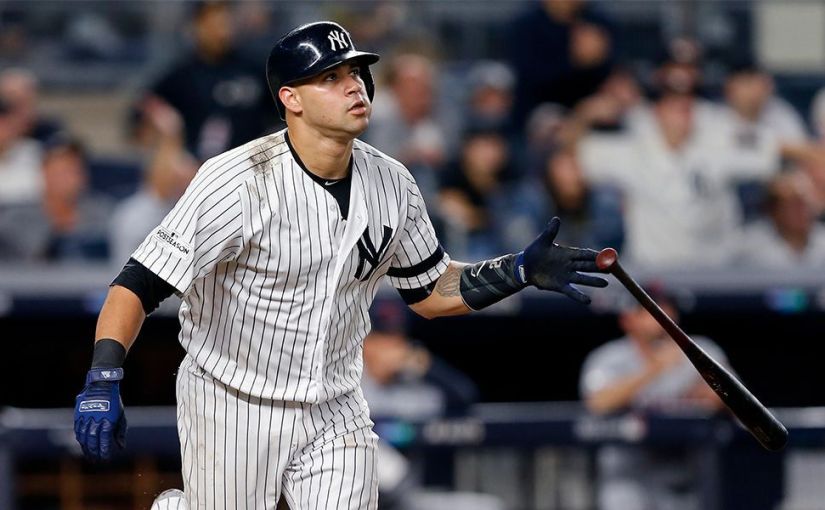 The All-Star Break is over and the New York Yankees returned to action Friday night with some Subway Series action in the Bronx. Manager Aaron Boone somewhat surprisingly gave rookie Domingo German the nod for the first start out of the break rather than ace and All Star Luis Severino, which hints at Boone’s long-term planning for a second-half push with the goal of overtaking the Boston Red Sox, winning the American League East, and completely avoiding the Wild Card Game.

With 62 wins before the break, the Yankees put together a first half that ranks among the best in franchise history; unfortunately, it was only good enough for a spot in second place behind the red-hot Red Sox. Let’s take a look at the 2018 Yankees as they stand and what needs to happen in the second half in order to win the division.

Settle Down, For Starters

The Yankees starting pitching really isn’t that bad. While another starter would certainly help considering the struggles of Sonny Gray and inconsistencies of Domingo German, a healthy front three of Luis Severino, Masahiro Tanaka and CC Sabathia is more than enough to anchor the Yankees for a push to the division. The Yankees starters’ ERA was 4.00 in the first half, good enough for sixth best in the AL — and that was with Tanaka injured for a month.

We don’t need to talk about Severino and how good he is. What many seem to forget is just how good Tanaka can be. Would JA Happ start a playoff game over Tanaka or Sabathia? Would Michael Fulmer and his 4.50 ERA give the Yankees final blow in the division race? The 2017 Yankees acquired two arms near the Trade Deadline last year — Gray and Jaime Garcia. Gray was the big acquisition, but he ended up making just two playoff appearances. Garcia wasn’t great in the regular season and made just one trip to the mound in relief in October as Severino, Tanaka and Sabathia led the Yankees to Game 7 of the American League Championship Series. That trio did it last year and that trio can lead the Yankees and their improved offense to a World Series championship this year.

Filthy Splitter from Tanaka to Josh Reddick to get out of the jam pic.twitter.com/neU5pYqbyI

Don’t get me wrong, adding an arm like Madison Bumgarner or Jacob deGrom would make a huge difference. Either of those pitchers would give the Yankees a second ace and make them the clear favorite to win the World Series. Unfortunately, grabbing a difference-maker like that seems unlikely.

After German’s dud against the Mets to start the second half, he was optioned to the Minors. Luis Cessa was recalled and probably will make the next start, but I think the Yankees and Yankees fans have seen enough of Cessa to know what he’s capable of, and it’s not much. At this point, given the fact that German has shown that he’s no longer an option, an arm like Happ or Cole Hamels — depending on what you’d have to give up — would certainly help so that the Yankees aren’t in a hole before the game starts every fifth day.

Even without a trade, the Yankees might have an answer …

… Barring the blockbuster deal for Bumgarner or deGrom, no trade should include top pitching prospect Justus Sheffield. The Yankees may have the key to the division right under their noses in Triple-A. The 22-year-old left-hander, ranked in the top 50 of Baseball America’s Top 100 Prospects at the start of the year, has done nothing but succeed in the minors this season.

It’s all smiles from @justus_sheffield after his outing this evening! Sheffield went 6 innings while delivering 8 K’s! #NextStopNY
•
📷: Tim Dougherty pic.twitter.com/2PCvwQqt6J

Sheffield began the year with Double-A Trenton, and after posting a 2.25 ERA, 1.07 WHIP and 39 strikeouts in 28 innings he was called up to Scranton/Wilkes-Barre. Since arriving at Triple-A, Sheffield struck out 56 with a 2.53 ERA and 1.18 WHIP in his first 57 innings. It’s pretty clear that the next logical step is a spot on the rubber at Yankee Stadium, but the organization is doing everything in its power to make sure Sheffield’s call to the bigs isn’t rushed and becomes an extended stay.

Boone was recently quoted as saying he needs to see “continued development” from Sheffield before he’s an option, but added that he’s “very close”. That could mean we’re as close as one dud by Cessa before seeing the 22-year-old in the Bronx, and there’s no reason to think he can’t be the stabilizing force this rotation needs.

Return Of ‘The Kraken’

Much has been made about Gary Sanchez’s defense behind the plate, but we’re not going to go into that because it’s one of the biggest overreactions among Yankees fans on Twitter. Yes, Sanchez lets up more passed balls than you’d like, but even just the threat of his cannon of an arm more than makes up for it, and most of the starters (the struggling Gray excluded) like throwing to him. It wouldn’t be as talked about anyway if he was hitting.

Runners are 10-for-10 stealing bases against the Yankees in nine games since Sanchez got hurt.

Yes, Sanchez is hitting under .200 and we’re well into July, but it’s fair to say injuries have hampered his start. A fully healthy Sanchez locked into the middle of the lineup is a difference-maker that most teams wish they had. Somehow a bad 50-60 games at the plate is enough for some to forget a historic first 175 games over the past two seasons in which he hit 53 homers with a .284/.354/.568 slash line. This isn’t a guy who was hitting .250 with some pop and is now struggling. Sanchez has proven to be a hitter who gets on base and hits for average, and he’s one hot streak away from single-handedly winning games for the Yankees. Some fans need to take a breather and realize what they have before screaming about trading a 25-year-old (TWENTY-FIVE-YEAR-OLD) catcher who is making peanuts this year ($620K) with three years of team control left.

While the Yankees have a winning record against the Red Sox, they have struggled against the Baltimore Orioles (5-5) and Tampa Bay Rays (5-4). With the Red Sox seemingly never losing a game, every loss for the Yankees is a frustrating one even when they’re 30 games over .500. Winning the majority of the 10 games remaining against Boston is a must for the division, but that still won’t matter without winning the majority of the remaining 25 games against the rest of the AL East.

The Yankees are currently on pace for an unfortunate meeting with the Seattle Mariners in a one-game Wild Card playoff, but if they can improve vs. the lesser teams in the division, get a boost from someone like Sheffield, and get Sanchez back to form, the East is still well within reach … if the Red Sox maybe mix in a few losses here and there.